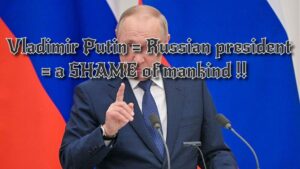 It is an awful tragedy for all mankind living on this earth to have this shameless, stinking, cracked nut;Vladimir Putin.

What this old con has done is an obvious crime against humanity.

I regret very little ‘humanists’ in Japan show clear protest against this serious invasion of human rights, as they often do so furiously when some American officer cause a minor traffic accident somewhere in some island.

So on behalf of those Japanese ‘thoughtful humanists’, I strongly condemn the most lunatic slaughterer in this sucking world, Vladimir Putin.

As Russian invasion of Ukraine has become even more intense, condemnations against Russia also have got stronger and wid...

I have never imagined so many Socrates are still living in Japan. Following my recent article, Socrates after Socrate...
【受ける前から】英語講師はフェイク求人だらけ【不合格確定】
Crazy ‘liberal’ in Japan